Video Webinar on DESALINATION IN INDIA 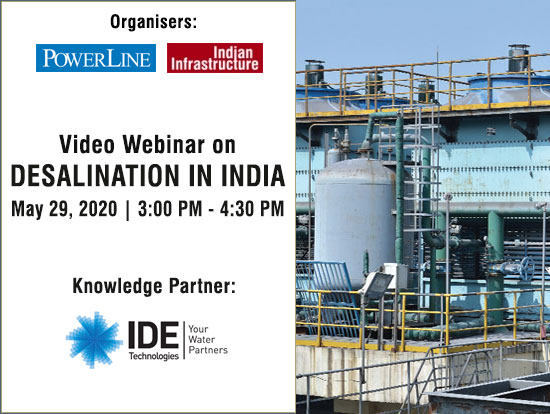 The potential of desalination of seawater and brackish water to meet the growing municipal and industrial requirements is slowly being realised. Industries such as thermal power plants and oil refineries are setting up large-scale desalination plants to meet their water requirements efficiently. At least 325 mld of desalination capacity is being set up for industrial use. On the municipal front, Tamil Nadu and Gujarat have witnessed a tremendous increase in desalination demand. At least 940 mld of desalination capacity will be added over the next three to four years in the municipal segment. Private sector participation in the desalination market has increased in the last one decade or
so. Advanced technologies and equipment are being deployed to reduce the high energy costs associated with desalination. Over the next three to four years, vast amounts of investments will be required to set up the planned desalination projects, thus presenting significant opportunities to key stakeholders.

In this context, Indian Infrastructure is organising a webinar to understand the progress and plans for desalination projects, highlight emerging technology trends and advancements, discuss the key issues, challenges and potential strategies being considered to fast-track implementation, and identify the new opportunities in the segment.

The panel will address questions such as: